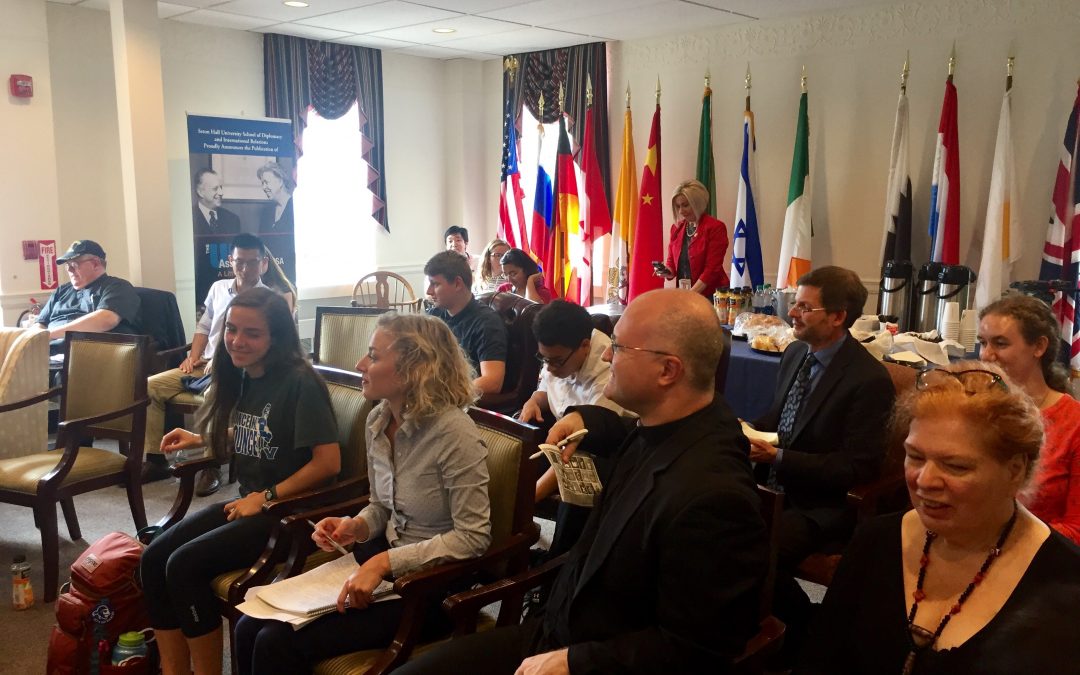 Last Tuesday, Seton Hall students of Diplomacy and International Relations gathered to watch the US Commander in Chief address the international community at the United Nations. President Trump’s speech at the UN was nothing short of an incoherent spew that was unsuccessfully passed off as a profound declaration. To be fair, there were moments of coherency and even a few moments of presidential rhetoric, yet put all together, mixed with blatant nationalism and direct threats, it created a soup of contradictions that left everyone’s jaws on the floor.  Having begun his speech with condolences toward those affected by the recent hurricanes, one might expect that he would address climate change that made the hurricanes all the more destructive. However, there was no mention of climate change, the Paris Agreement, or any other number of issues that a US President would typically address. Instead, he followed his opening statement by praising the United States and its unusual growth since his presidency to an unimpressed global community. Throughout the rest of the speech we heard the repetition of the words “sovereignty, security, and prosperity” in addition to “calling out” specific countries and even delivering warnings.  Disappointingly, every moment of commendable presidential rhetoric, such as the promotion of peace in the world, was soon contradicted by his classic outlandish flex of power.

As a student of diplomacy, I found myself at times smirking, laying my head in my hands, and even outright cringing. In an organization such as the UN where the promotion of peace is at the forefront, a world leader should not be touting their military power, capacity for demolition, and the hundreds of billions of dollars being spent to make it even stronger. The UNGA is not the place or time to arrogantly publicize ones possession of instruments of destruction that cause deeper suffering and peril in the world. In fact, the UN promotes the exact opposite of war as the organization was built out of the ashes of both World War I and World War II to prevent a third world war. Thus far, it has been successful. Which brings me to the next point of Trump saying that the US does not benefit from the UN. I think all can agree that not suffering a third world war is beneficial to everyone on this planet, especially with the capability of nuclear weapons and the aftermath of such an atrocity. That is but one example of how the US benefits from the world being safer and more secure with the help of the UN. I agree with him that the UN is in dire need of reform, in many regards, one being that countries “pull their weight” when it comes to “footing the bill.” But a world without the organization altogether is not world I’d ever want to imagine.

I had high hopes for our president at the General Assembly. It would have been a great chance to show the international community that the US is still an influential, rational, and strong leader in the world. But many of his words echoed division, pointing the finger, and flex of power. All of the great statements he made were undermined by inconsistencies and unprecedented “throwing down of the gauntlet”.  Perhaps the loudest gasps occurred when Trump threatened to “totally destroy North Korea.” Let us not forget that United Nations is the largest and single most important organization founded upon peaceful cooperation. It has been able to not only bring, but keep 193 countries “at the table”. Thus far, it has successfully contributed to the prevention of a third world war. It was disheartening to hear the leader of the free world, with his threats of annihilation, seemingly trying to start World War III.