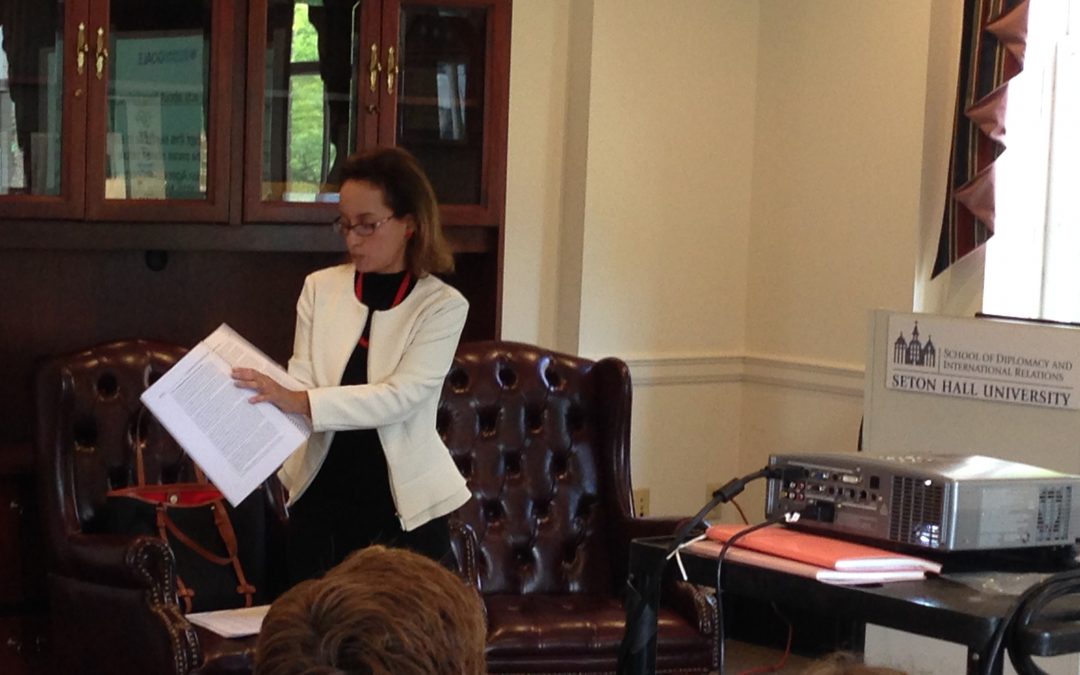 Claudia LaRue, the First Secretary of the Permanent Mission of the Dominican Republic to the United Nations presented at the School of Diplomacy and International Relations on 13 September 2017. The topic of her presentation was UN 2030 Sustainable Development Agenda for Sustainable Development: Past, Present, Future.

What is the Agenda composed of?

The 2030 Agenda on Sustainable Development

The Agenda takes into the account the opinion of millions of people and covers everyone. It is designed to be inclusive, universal and indivisible. The 2030 UN Agenda for Sustainable Development is much more inclusive than the Millennium Goals. The Sustainable Development Goals (SDGs) were ratified by 193 member states in September 2015. It took members 3 years to negotiate this Agenda. The negotiation process took place in groups, blocs or independently.

One of the main outcomes of the United Nations Conference on Sustainable Development (Rio+20), held in Rio de Janeiro in June 2012, was the agreement by Member States to launch a process to develop a set of sustainable development goals (SDGs).

Rio+20 did not elaborate specific goals but stated that the SDGs should be limited in number, aspirational and easy to communicate. The goals would address in a balanced way all three dimensions of sustainable development and be coherent with and integrated into the UN development agenda beyond 2015. A 30-member Open Working Group (OWG) of the General Assembly was tasked with preparing a proposal on the SDGs.

The Rio+20 outcome document The Future We Want says that, at the outset, the OWG would decide on its methods of work, including developing modalities to ensure the full involvement of relevant stakeholders and expertise from civil society, the scientific community and the United Nations system in its work, in order to provide a diversity of perspectives and experience.

Main Features of the Agenda

Member States stressed that the desired transformations will require a departure from “business as usual” and that intensified international cooperation on many fronts is needed. The agenda calls for a revitalized, global partnership for sustainable development, including for multi-stakeholder partnerships. It also calls for increased capacity-building and better data and statistics to measure sustainable development.

An effective follow-up and review architecture has been set up — a core element of the outcome document — will be critical to support the implementation of the new agenda. The High Level Political Forum on Sustainable Development, set up after the Rio+20 Conference, serves as the apex for follow-up and review and will thus play a central role.

There was established a Technology Facilitation Mechanism to support the new goals, based on multi-stakeholder collaboration between Member States, civil society, business, the scientific community and the United Nations system of agencies. The Mechanism, which was agreed at the Addis Conference in July 2015, will have an inter-agency task team, a forum on science, technology and innovation and an online platform for collaboration.

Developing countries generally work through the Group of 77 to establish common negotiating positions. The G-77 was founded in 1964 in the context of the UN Conference on Trade and Development (UNCTAD) and now functions throughout the UN system. There are 134 members in the Group. The country holding the Chair of the G-77 in New York (which rotates every year) often speaks for the G-77 and China as a whole. However, because the G-77 and China is a diverse group with differing interests on different issues, individual developing countries also intervene in debates, as do groups within the G-77, such as the African States, the Small Island Developing States and the group of Least Developed Countries.

The Small Island Developing States (SIDS) is a coalition of some 40 low-lying islands, most of which are members of the G-77 that are particularly vulnerable to sea-level rise. SIDS countries are united by the threat that climate change poses to their survival and frequently adopt a common stance in negotiations.

The 48 countries defined as Least Developed Countries by the UN regularly work together in the wider UN system. They have become increasingly active in the climate change process, often working together to defend their particular interests, for example with regard to vulnerability and adaptation to climate change. Previously there were 49 countries in the LDCs Group. However, in 2014 Samoa graduated from the LDCs.

Other States that negotiate independently include Australia, Canada, Iceland, Japan, New Zealand, Norway, Switzerland and the United States of America.

This year the HLPF took place from July 10-20 and 44 countries made Voluntary National Reviews.

In accordance with paragraph 84. of the 2030 Agenda, Member States decided that the HLPF shall carry out regular voluntary reviews of the 2030 Agenda which will include developed and developing countries as well as relevant UN entities and other stakeholders. The reviews will be state-led, involving ministerial and other relevant high-level participants, and provide a platform for partnerships, including through the participation of major groups and other relevant stakeholders

The theme was “Eradicating poverty and promoting prosperity in a changing world“. The set of goals that were reviewed in depth were the following, including Goal 17. Strengthen the means of implementation and revitalize the Global Partnership for Sustainable Development, that will be considered each year:

Goal 3. Ensure healthy lives and promote well-being for all at all ages- Since 2000, impressive advancements have been made on many health fronts, including combatting infectious diseases and non-communicable diseases and mental health, but more efforts are needed to improve reproductive, maternal, newborn and child health

Goal 9. Build resilient infrastructure, promote inclusive and sustainable industrialization and foster innovation- Despite steady improvements in manufacturing output and employment, renewed investment will be needed in the least developed countries to build needed infrastructure and ensure the doubling of industry’s share of GDP in those countries by 2030.

Goal 14. Conserve and sustainably use the oceans, seas and marine resources for sustainable development- The first ever Oceans Conference was held in June 2017. The increasingly adverse impacts of climate change (including ocean acidification), overfishing and marine pollution are jeopardizing recent gains in protecting portions of the world’s oceans.

What Can You Do?

The below films have been developed through a partnership between UN SDG Action Campaign, UNDP, UNF and Project Everyone. Contact us if you would like original files and/or can help translate these films

Using short clips from classic films across all genres, we have created a short film reiterating to the world that ‘We have a plan’

‘Numbers in Action’ is a short animated film which brings the ‘Icons to Outcomes’ work to life.

Leave No One Behind