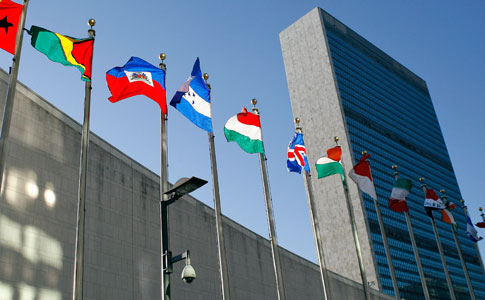 On Thursday March 17th, the DPI/NGO hosted two sessions in collaboration with the sixtieth session on the Commission on the Status of Women. The first session titled “Women and Girls: From Adversity to Hope” hosted a panel of women whose hardships and personal trauma lead to the creation of their organizations to help and empower other women in similar situations. The second session “Happiness and Gender Equality in the Sustainable Development Goals” hosted a panel of ambassadors, executives in the private sector, and academia to examine the implementation of the Sustainable Goals 3 and 5, ensuring good health, well-being, and happiness and supporting gender equality.

During the women and girls session, there was not a dry eye in sight as each of these women told their story and their outcome when it seemed like all hope was lost. In 2005 Monica Singh had been covered with acid on 65% of her body and left her to cover her face for the next eight years. The Mahendra Singh Foundation helps survivors win back their independence and teaches them that “life doesn’t end here, life is just the beginning”. Consolee Nishimwe lived through the Rwandan Genocide at 14 years old and spoke about her life through that tragedy and how she continues to tell her story to inspire other women to never give up hope. Naila Amin was a child bride survivor, being engaged in Pakistan at 8 years old. She remembers the day that changed her life was when she asked herself “Are you a victim or a survivor?” beginning her campaign as an activist while pursuing her college degree in New York City. Sarri Singer established Strength to Strength after surviving a terrorist bombing on the #14 bus in Jerusalem in 2013. Alexandra Akira created Goddess in Progress to visualize hopeful situations for women and girls everywhere. This moving session showcased the success that women can have when they put the time and energy in uplifting themselves through their hardships and tragedies in life.

The Happiness and Gender Equality session gave each panelist the chance to explain their efforts in implementing the SDGs within their country, company, or community. Einar Gunnarsson, Permanent Representative from Iceland, light heartedly spoke on how we need to accept an angry disgruntled society in order to achieve happiness. Iceland is recognized to be #1 in Gender Equality and #2 on the World Happiness Report. Lana Zaki Nusseibeh, Permanent Representative from the United Arab Emirates, said “one of the major achievements of the Federation, in my view, is realizing happiness for its society.” She spoke on the UAE’s achievements in making happiness a priority and even noted that their Minister of Youth was a 22 year old woman, breaking the barriers and promoting inclusivity. Executive Vice President of Marriott International David Rodriguez spoke on the customer’s well-being being influenced by the happiness of his employees using his “Go. Be Happy” employee communications program. Jennifer Olmsted made an interesting comment discussing how the state of families can be affected by the SDGs and how community vitality and recognizing different kinds of families can also lead to happiness in a country.

The morning’s briefings gave hope and happiness in discovering the efforts that can be done from the state to the individual. Everyone has their part in implementing the Sustainable Development Goals and we must recognize that we have to help each other and ourselves in order to achieve gender equality and happiness in the world.