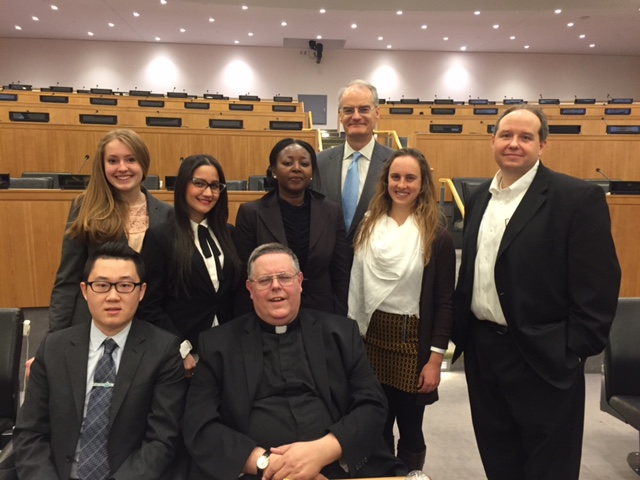 NOTE: This guest post was written by Diana Kraiser Miranda. Diana is a graduate student at Seton Hall University. She started her Master´s degree in Diplomacy and International Relations in the spring of 2016. Her specializations are Latin America and the Caribbean and International Organizations. Diana is from Brazil and has a bachelor degree in Psychology. Passionate about other cultures, she has experience living abroad in Israel and England. She is now looking forward to understanding the complex dynamics of Latin America and how democratic movements influence the region´s development.

On Tuesday, January 26, United Nations Academic Impact (UNAI) and the International Studies Association (ISA) co-hosted the event “The United Nations Confronting War and Violence: Lessons After 70 Years.” Since it was my first time at UN headquarters, I arrived with high expectations on how the eight panelists would cover conflict prevention and peace building. At the end, the speeches were more thought-provoking than I expected.

The urgency to address violence and war has been among the most visible efforts of the United Nations since its creation. Although violence is not limited to war, military disputes are one of the main causes of human rights violations, creating chaos that transcends national boundaries, as seen in the recent waves of migration in Europe. Therefore, violence has become a major public issue, represented by a wide range of types such as gender-based violence, child neglect, sexual abuse, and human trafficking. The purpose of the panel was to discuss what the United Nations has learned during these 70 years confronting war and violence. Below are five observations from the discussion:

1. Both scholars and policy makers make a difference. As such a complex subject, the discussion on violence demands different sources of knowledge to have a broader impact. The panelists presented different backgrounds, from scholarly representatives to leaders of peace reconstruction programs, offering three hours of experiences in diverse fields of study and work. All of them, however, argued for education, inclusion, and partnership as means to overcome war and violence.

2. Conflict prevention is essential. Along with confronting armed conflicts and violence, prevention should be a priority. Rima Salah, former Deputy Executive Director of UNICEF, emphasized the importance of partnerships between civil societies and regional organizations, whereas Arturo Sotomayor of the University of Texas, advocated for elections and democracy playing a key role in peace building, especially in developing countries and war- torn societies.

3. War is a signal that something is going wrong. Some of the panelist’s speeches shared insights about the roots of violence. In the experience of Dr. Sotomayor in Latin America, land distribution, the need for land reform, and the lack of justice are circumstances contributing to political violence. Jean Krasno, a lecturer at the City University of New York, highlighted the still inadequate representation of women in society and their vulnerability in crises. All sources of violence should then be eliminated for equal rights in every sphere. She also invoked a need for women to assume leadership roles in political positions.

4. Threat to basic needs are important drivers of conflict. It is not a matter of generalization or underrating unique features, but violence in different contexts holds much of the same characteristics. From their experiences in Africa, Europe, Asia, North, and Latin America, the panelists explained that the causes of war are more related to disrespect of basic needs, than they are to more complex elements. Understanding why violence unfolds is crucial to developing the next steps towards conflict resolution and prevention.

5. Strategic partnerships are essential for progress. Cyril Obi, Program Director at the Social Science Research Center, called for a holistic approach. Confronting violence means understanding it in every dimension. Ambassador Hardeep Singh Puri added: “listen to the people who knew what was happening.” The United Nations is associated with the protection of cultural diversity. As the panelists made it clear, people around the world in general know so little about each other. To improve that, they argued for more civil society participation in the work of the UN.

Although not a magical formula, these lessons may represent one more step towards a broad approach to stopping violence. As Dr. Sotomayor simply clarified, “justice delayed is justice denied.” Scholars collect and analyze a large amount of data from different regions and experiences. They must be compared and contrasted in order to have a profound impact. Academia should take this responsibility, not in a way that will export unattainable prescriptions to policy makers, but, on the other hand, that will help us to understand patterns of behavior and find areas of potential reform. The United Nations has learned that partnership is of paramount importance, mainly in preventing violence. The Sustainable Development Goals, the most recent 17- point plan to a better world, indicate this is the direction to follow, calling for a more extensive civil society involvement. SDG number sixteen features Peace and Justice. However, as these 70 years have revealed, these 17 goals should be addressed together. If history has taught us something, it is that it repeats itself. Why not learn from that?