US Ambassador to the UN Samantha Power Speaks at Seton Hall 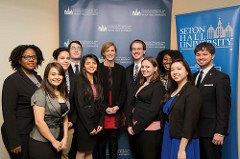 This guest post was written by Angelo Piro, one of the School of Diplomacy’s UN Youth Representatives. Angelo is a student majoring in Diplomacy and International Relations and Economics at Seton Hall University. Angelo’s focus has been on the role of international organizations in development and good governance. He is fluent in English and Spanish, and has a working knowledge of Russian. Angelo has studied at Dubrovnik International University, in Dubrovnik, Croatia, and has interned with the Permanent Mission of Honduras to the United Nations and the Office of US Senator Kirsten Gillibrand (D-NY). He writes for the Diplomatic Envoy, and is a member of the Seton Hall United Nations Association. He is pictured in the photo accompanying this post to the immediate left of Ambassador Power.

On January 13th, Samantha Power, US Ambassador to the UN, was welcomed to Seton Hall University to speak on the foreign policy outlook that President Barack Obama had outlined in his final State of the Union address the evening before. In his welcoming remarks, Seton Hall University School of Diplomacy Dean Andrea Bartoli reflected on the importance that the event represented as an opportunity for dialogue.

In her speech, Ambassador Power took the opportunity to share her views and perspective on President Obama’s foreign policy plan for his final years in office, as well as reflect on the progress the she and the administration had made over the previous years. Reiterating the statements that the President had made, Ambassador Power reaffirmed her belief that the United States of America still stands strong and respected on the world stage. She also emphasized the objectives of President Obama’s foreign policy from the beginning of his presidency to his last days in office has always been to ensure American strength and security and rebuked many commentators who have claimed that the United States has faced a decline in respect and prestige. In speaking on her encounters with persons at the UN and in her travels abroad she said “If there’s one formula for every encounter…they’re going to be asking the United States to lead – and believing that little will happen if the United States does not”.

She also laid out what she viewed as the guiding principles of American leadership abroad, both in the past and going forward, those being coalition building and multilateralism, principled engagement with all parties, and a the preservation of the values we are known for. On coalition building, Ambassador Power made clear that, while the U.S. has the means to solve many of the world’s problems, the U.S. must engage other nations in reaching shared goals in order to defray the cost to the U.S. as well as strengthen collective efforts. She highlighted the recent climate change agreement signed in Paris as one example, and spoke on how she and the President are bringing this same engagement to the fight against ISIL. In looking to the future, the Ambassador commented how the United States needs to make multilateral tools truly American tools and an extension, not an alternative, to standard U.S. processes.

Also a topic of discussion was principled engagement on the world stage, especially with adversarial states. In her experience, Ambassador Power found that engagement, rather than isolation, is far better in effecting change, and that diplomacy should become a standard of the US foreign policy toolbox. Also, rather than being naïve to the behavior of states with whom the U.S. is negotiating with, she suggests a siloed approach that allows for engagement on other issues, while still applying pressure on a wide scope of other issues. She highlighted the work of the Obama administration in Iran and Cuba, and spoke at length to the United State’s commitment to fighting for better conditions within Cuba despite the recent rapprochement.

The final point that Ambassador Power stressed was America’s commitment to the highest moral values. The current refugee crisis, for the Ambassador, is the greatest challenge to American moral leadership, as many seek to limit a refugee’s ability to enter the US. Whether they be from Syria or Central America, Ambassador Power emphasized the need for the U.S. to keep its commitment to the world and our values. It is here that the Ambassador spoke with the most candor, featuring several refugee families in the audience and refugees advocates, even speaking on her experience as a child of immigrants.

Ambassador Power also took time to answer questions from Diplomacy students, Diplomacy alumni, and members of the public. These interactions ranged from questions on the US policy for Central American refugees, her memories of her time as Ambassador and even her opinion as a journalist and policy maker on how to engage the public in foreign policy matters.

More coverage of the event, including the video, can be found here.