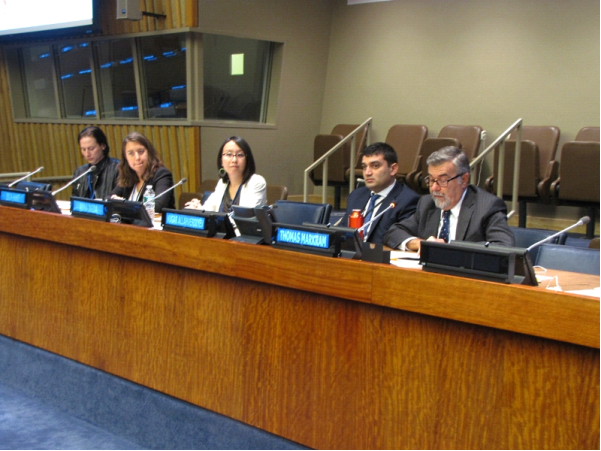 NOTE: This post was written by Elaina Estrin, one of the School of Diplomacy’s UN Youth Representatives. Elaina is a student majoring in Diplomacy and International Relations and Modern Languages. Elaina’s focus is on international organizations and post-conflict state building. She is fluent in English and Russian and she spent the past summer continuing her Arabic Language studies in in Muscat, Oman. Elaina has interned with the office of Senator Bill Pascrell (D-NJ) and taught English in Petrozavodsk, Russia. She has also worked closely with a DC based consulting firm called Field Strategies. Currently she is the head of Public Relations of SHU’s Slavic Club and Vice President for SHU’s International Law Society. Elaina was a blogger for the 2015 Social Good Summit.

Never again – these were the only two words that could describe the tragedy that occurred in Nagasaki and Hiroshima. Yet somehow nuclear disarmament has been put on the back-burner in the minds of so many youth. On the 16th of October, the Permanent Mission of Japan and the Steering Committee for the International Youth Summit for Nuclear Abolition held a side-event to discuss the Generation of Change: Encouraging Youth Action for Nuclear Abolition. Many of us do not think of nuclear weapons as a problem anymore. Countries know that the costs of weapons programs are too high and they outweigh the benefits. But is that true? If nuclear weapons are no longer an option, then why keep nuclear stockpiles that threaten the livelihood of people all over the globe?

1.8 billion of the world’s total population is composed of youth, and that number is increasing. We hold the power to create change as the leaders of today! Although there may not be a celebrity like Beyoncé to endorse nuclear abolition, that does not mean that youth should be careless about it. Our generation has the potential to create a world, in our lifetime, without nuclear weapons, which not only appeals to moral and ethical awareness, but also creates benefits in sustainable peace. Youth have also grown up in an age with lots of technological advances. We now have the tools to speak words to more people more quickly than ever before. That means we can advocate and express the issues important to us to a wide audience! Youth can harness that power towards a cause that has a plausible end: nuclear abolition.

The United Nations was created to maintain international peace and security, develop friendly relations among nations, achieve international co-operation in solving international problems, and to be a center for action in achieving these common ends. So looking back to why the United Nations was created, the need for disarmament seems even more necessary and relevant. If nuclear abolition occurs, international tension will be relieved and countries can focus on cooperation, rather than building up their arms due to outside threats. As one of the speakers at this side event, Thomas Markram, Deputy to the High Representative for Disarmament Affairs said, disarmament will also liberate human resources so they can be put to better use in collaboration within the international system.

Another speaker at the event, Erin Hunt from Mines Action Canada, discussed the issues faced with involving youth in the discussion or nuclear abolition. She talked about how youth are accustomed to rapidly sharing information and limitless action. We want to know what is going on as it happens, live tweeting and being able to talk to decision makers directly. That is not what is happening in the disarmament campaign, an outdated model of work is being used and youth have not been accepted into the dialogue. Erin talked about how youth that are already involved should not be underestimated because they are passionate and knowledgeable. However youth that are not yet involved, but would like to get involved, face a problem finding a seat at the table.

With the nuclear abolition talks, there are limited civil society discussions and heavy use of technical jargon. This is a problem with a solution. The disarmament community needs to conduct briefings to educate civil society, use digital diplomacy, and create mentorship programs for youth that give them the skills and experience that will make them stand out in the work force. These changes are what will make a difference and keep the youth engaged on this issue. Also increasing funding for youth participants at summits, conducting training and briefings, and funding travel so youth can attend the meetings is essential to having comprehensive action and helping the generation that can create nuclear abolition.

Matt De Vileger from United for Peace and Justice talked about how states that have nuclear weapons are the ones that need to see more museums and memorials dedicated to the tragedies in Hiroshima and Nagasaki. More youth in America and Russia would be calling for disarmament if they saw exhibitions like those in Hiroshima, of people with hanging skin, ripped clothes, and on fire in the rubble. These displays appeal to our empathy for other human lives and then cause people to be moved to lobby for disarmament. If nuclear weapons are abolished, this also has a huge implication on norms in the international community. This would promote humanitarian efforts and cooperation rather than destructive wars and tension between states. An end to nuclear weapons would tell our leaders that we no longer stand for such a blunt violation of human rights and a destabilizer to world security. Youth need to have a seat at the table in talks for nuclear disarmament, only then can we be the generation that will demand disarmament in our lifetime!