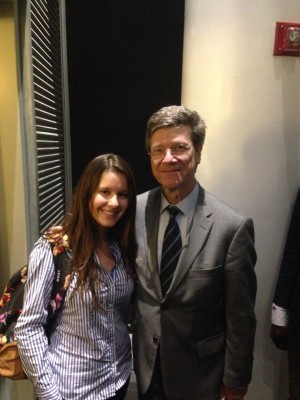 NOTE: This post was written by Renata Koch Alvarenga. Renata is a freshman at the School of Diplomacy and International Relations. She is from the South of Brazil and speaks Portuguese and English fluently. She is currently studying Spanish and French at the advanced and the intermediate levels. Renata is the Under Secretary-General for Programming at the United Nations Association –Seton Hall University chapter. She is also a national articulator of the youth organization Engajamundo in Brazil, helping to empower young people in international negotiations regarding gender, sustainable development, and climate change. Renata is passionate about global affairs and has been involved in Model United Nations for a long time. She is pictured on the front page of the blog with Professor Jeffrey Sachs, Director of the Sustainable Development Solutions Network and the Earth Institute at Columbia University.

Days away from the United Nations Sustainable Development Summit and the 70th session of the UN General Assembly, a crucial event was held at Columbia University on September 22nd: Youth for SDGs. Hosted by the United Nations Sustainable Development Solutions Network (SDSN), the event had as its main purpose the convocation of youth to take action and put the 17 Global Goals into practice. The role of young people in the path to achieve all of the sustainable development goals was stressed as vital and their effective participation was encouraged in an urgent tone.

Among the speakers was Ahmad Alhendawi, United Nations Secretary-General’s Envoy on Youth, Jeffrey Sachs, Director of SDSN and the Earth Institute at Columbia University, Noëlla Richard, Youth Policy Specialist at United Nations Development Programme (UNDP) and Siamak Sam Loni, Global Coordinator of SDSN Youth. All of them represent key actors on the empowerment of youth in the Post-2015 Agenda.

During the event, there was an immense emphasis on what can be done to efficiently implement the goals. The SDSN-Y (Sustainable Development Solutions Network-Youth) presented their global campaign, named #KnowYourGoals, which focuses on spreading the word about the goals and making sure that young people around the globe not only know what the goals are, but also their paramountcy and their significance for the community. The main idea is to make the Post-2015 Sustainable Development Agenda a successful movement in the next 15 years, proving that participation of young people is pivotal in order to accomplish the Global Goals. Youth are the protagonists of these negotiations, since the issues discussed now will directly affect them in a near future.

In his speech, Jeffrey Sachs stated how important it is to memorize all 17 goals. He specifically asked everyone in the room to learn, know, and advocate the Global Goals. Using Sachs’ words, youth have to “become experts in saving the world.” The seriousness in the request of the speakers, in particular Jeffrey Sachs, gave every young person in the room a sense of the frail situation we are living at the moment. It became clear that action is imperative, as we do not have 20 other years to wait around, as it was done in the past.

According to the speakers, youth have all the keen tools to fight against the current issues the world is facing: the best technology and network. However, none of that will be worth it if the goals are not adopted consciously. The goals represent where we must be by the year 2030, and nonetheless they need to be accomplished fully to represent a real change and improvement in the planet.

The world had already adopted sustainable development 23 years ago at the Earth’s Summit (United Nations Conference on Environment and Development, 1992) and it failed. This time is our second and last chance to achieve the SDGs. Youth collaboration in the decision making is crucial and it is everyone’s responsibility to ensure that their voices are heard.