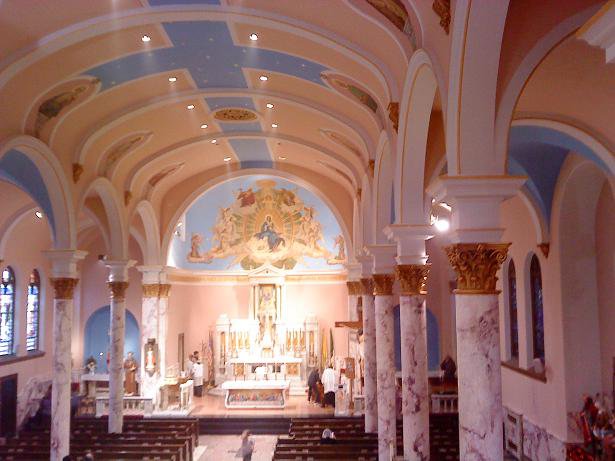 This lovely Baroque church was opened in 1904 and consecrated in 1928. The parish website describes the church as follows:

“The edifice is a synthesis of three architectural types—Greek, Byzantine and Roman. Greek strength and simplicity of design were reflected in the basic rectangular building with a double-pitched roof, a pediment, Corinthian architrave, frieze and cornice. The arched doorways, windows and niche reflected the quiet grace of Roman architecture. Three elegant Byzantine pillared cupolas crowned the campanile and atop each of the two pilasters framing the façade. The central nave between two side aisles was reminiscent of the Roman basilica and divided by two rows of columns. Each has a Corinthian capital of acanthus leaves. The vaulted nave, aisles, arched recesses of the two side altars and the sanctuary is Byzantine expressions of Roman structural features.”