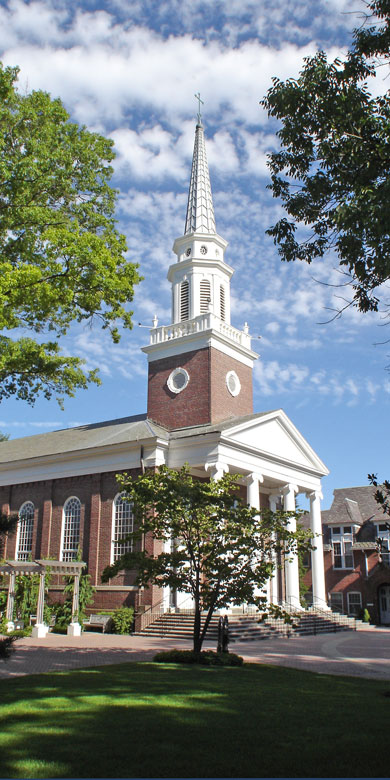 The original church was built in 1909 and extensively added to and renovated over the years. Today’s church is the result of the work of Msgr. John J. Ryan. Ryan purchased original works of art and copies of Old Masters to adorn the church. He also purchased various objects from the New York City mansion of Charles Schwab, when it was demolished.

In 1952, Ryan’s work resulted in a delightful church in the American Colonial style, a style usually associated with Protestant churches in New England. He employed Joseph Shanley as architect and Wilfred Anthony as interior designer.

The church boasts paintings by 15th, 16th, and 17th century artists and fine copies of works by Old Masters. An example is a copy of Raphael’s Madonna by Rembrandt Peale.

The main altar is pink and rose marble with bronze decorations. The bronze in the altar rail, now shortened, was taken from the bronze in the main staircase of Charles Schwab.

Likewise, the tabernacle lamp and two other sanctuary lamps are 16th century Spanish items from the Schwab mansion.

The tabernacle is silver plated bronze.

The interior gives a feeling of light and peace due to the muted tones chosen during a recent renovation.

The organ was rebuilt in 1966 by Robert Turner.