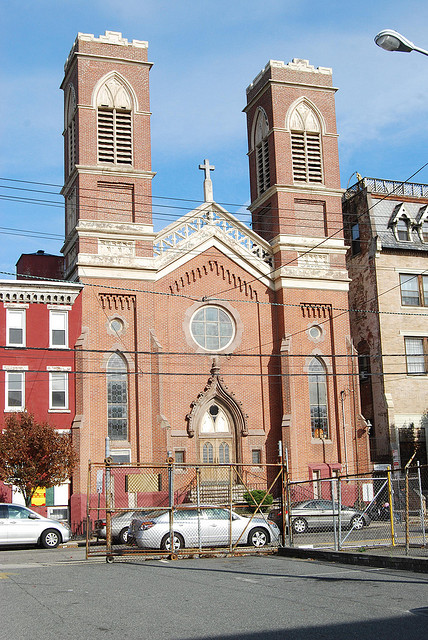 St. Boniface was established to serve the once-flourishing German community of downtown Jersey City. A modest-sized, simple, and attractive Gothic Revival building, the church was opened in 1866.

In 1894, a new main altar was erected, and, in 1896, magnificent stained glass windows fabricated by the Tyrolean Stained Glass Company of Innsbruck, Austria, were installed. Steeples were added to the facade in 1897 but, due to structural problems, the upper portions were removed in 1928. In 1897, bells from a manufacturer in St. Louis, Missouri, were placed in the steeples.

The church was redecorated in 1900 and a new communion rail was placed in the church in 1903. In 1913, the church was again redecorated and electric lighting replaced the original gas lighting. Further redecoration took place in 1938 and 1955 but the church retained its original appearance until it was closed in 2006.

Commentary: In 1996, St. Boniface became part of the Parish of the Resurrection. In 2006, the church was closed. Its stained glass windows have been repurposed and restored and now are in a mausoleum in Holy Name Cemetery in Jersey City