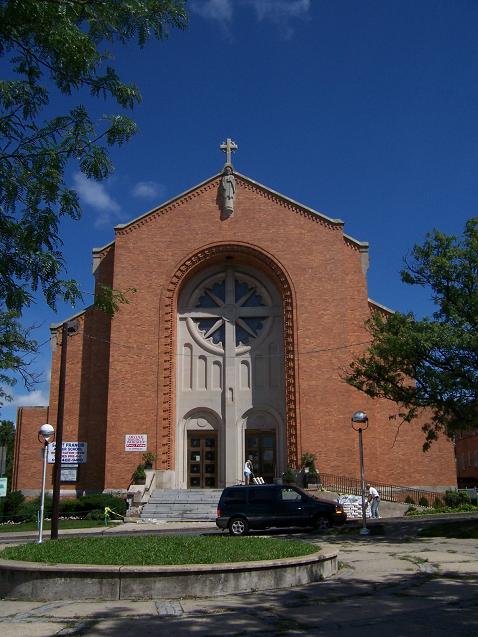 Orange – Our Lady of Mount Carmel

The present church, which seats about 950, was dedicated on December 8, 1933. The church is a fine example of Italian Renaissance architecture and is of a style that has been called Lombard Romanesque. Standing 160 feet above the street below is the church’s bell tower that is a stylistic interpretation of the Venetian campaniles of San Giorgio and San Marco. The top of the tower, in brilliant gold leaf, is visible for miles, especially from Interstate 280.

The front facade contains artistic details that are inspired by other famous churches of the Italian Renaissance period. The magnificent bronze doors are particularly notable. The facade also boasts the episcopal coat of arms of Bishop Thomas J. Walsh of Newark and the Italian royal arms of the House of Savoy.

The interior was modeled after several Franciscan churches in Italy. Like its exterior, the interior contains warmth of character and pleasing proportions that can be attributed to its reliance on Palladian architectural principles of symmetry and balance. The Stations of the Cross, in the style of Della Robbia, were executed in Germany.

The builder was D. J. Cronin.

Given to the care of the Capuchin Friars until 2006, the parish currently is under the direction of the Brothers of St. John.

Published in Essex and Orange

Name of Parish: Our Lady of Mount Carmel