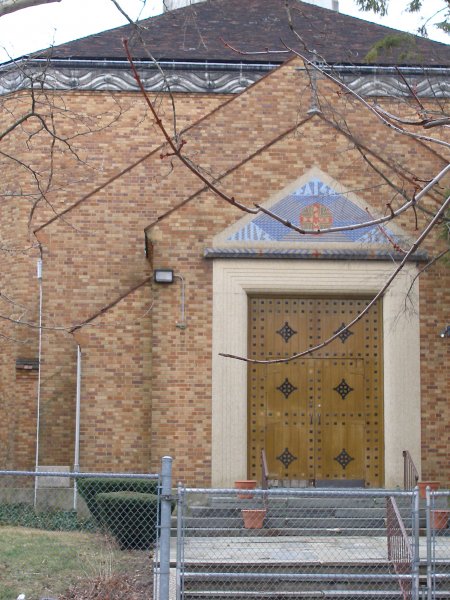 St. Charles Borromeo church is both a departure from conventional church architecture and a great achievement in expressing a devotional spirit. The architect, Joseph Sanford Shanley, conceived a church which would be relatively small, functional, and suited to the square plot of land upon which it was to be built. Hence he designed it octagonal in shape instead of cross-shaped, without pillars to permit full view from every part.

The exterior of brick was selected as being the most suitable for this shape, and the varied coloring was chosen to harmonize with the existing school building across the street.

The circular-church effect, which is produced inside by four similar arches at the north, east, south, and west sides of the church, tends to produce a congregation-centered effect, a spirit which is in full harmony with later liturgical changes. Further, the similarity of the altar alcove with the other three alcoves, tends to unite the altar to the congregation, rather than separate them, as is so common in a cruciform church.

Four saints in applied mosaic decorate the interior of the church. they achieve a happy balance of not being too detailed, and at the same time, not merely symbolic.

The windows achieve a happy balance between realism and symbolism. Designed and made by Emil Frei, they show the potentialities of a relatively inexpensive material. Color has been sparingly used and most of the glass is only slightly tinted – yet the overall effect is both beautiful and delicate. The heavy lead lines bring out the character of each window.

– Archives of the Archdiocese of Newark