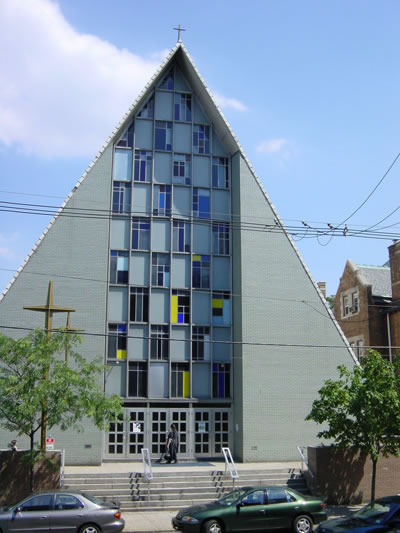 For an excellent professional analysis of this striking church see the website of the International Working Party for the Documentation and Conservation of Buildings, Sites, and Neighborhoods of the Modern Movement (docomomo_us).

Arthur Rigolo was the architect of the acclaimed St. Philips’s Church in Clifton, featured in Time magazine in 1955, as well as of St. Peter’s Church in Jersey City.

The following is from an article by John Gomez in the Jersey Journal, January 24, 2007.

A perfect polyhedron situated on New york Avenue between 39th and 40th streets, it stands in – and splits wide open – the epicenter of an architectural axis pinnacled for over a century by the Weehawken Water Tower to the ease, the Simon Silk Mills to the west and, all around its triangular form, the proud Gothic towers of nearby ancestral churches.

The abstracted apparition, rising vertically on a stepped platform, informs us that midway through the 20th century Modernism found its way to Hudson County, irrevocably shifting the Union City street-scape.

In the autumn of 1956, less than two months after being installed as the new parish pastor, Father (James J.) Healy, a Jersey City native, hired an architect.

Arthur Rigolo, Clifton-born and based, came with an impressive resume (that included being) nationally recognized architect of St. Philip the Apostle Church in Clifron, a revolutionary commission that landed him in Time Magazine in 1955.

(Father Healy) desired a deeply canted tent-roof so as to take advantage of the narrow lot between the parish school and rectory.

(The) parishioners would be spellbound by the spectacular interior, which the Hudson Dispatch called “much more than a trip into the future world of building design.”

In the last few months, St. Augustine’s clay tile canvas has been hammered away and replaced with plain green slate wavers – the result of serious mechanical failures nad high replacement costs. And still the luminous edifice glistens and overwhelms its ancient neighbors, even without its gem-like shroud.

Published in Hudson and Union City