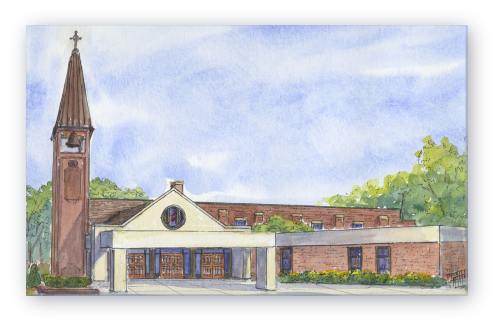 Originally built as an “auditorium church” in 1952, Saint Peter’s has been transformed into a magnificent postmodern church building. Over the years there were a series of renovations but finally in 1999-2000, after an extensive renovation, a new church appeared. Anthony Genovese was the architect and designer of the “new” church that includes a new entrance and bell tower. Genovese incorporated many elements from previous renovations of the church.

For an excellent “church tour” that includes a liturgical, architectural, and theological explanation of this transformation, see http://www.saint-peter.org/tour_intro.htm