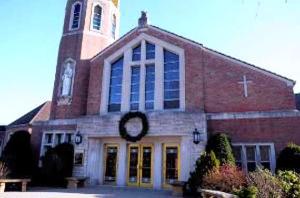 The architecture of this postmodern church has been described as “modified Gothic of contemporary design. The building, roughly cruciform, consists of a main center and angled side wings having the front of the main altar as the focal point of each wing. The octagonal tower to the left of the main entrance facade houses the baptistery at the nave floor level. The Cararra marble used in the sanctuary was cut and polished by the Gaspari Studios in Pietrasanta, Italy. The candle holders on the altar are from the former church. The tabernacle on the altar of the Blessed Virgin is from the former church.

Published in Bergen (P-W) and Ramsay