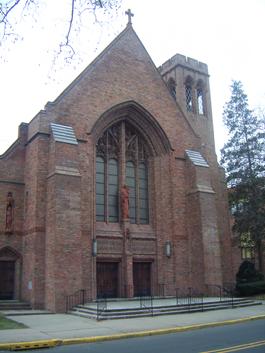 English Gothic in style, the front facade includes a heavily moulded arch in the principal gable, embracing an elaborately traceried north window. Supported on a pier between the doorways and forming part of the central mullion of the window is a large clay image of St. Joseph, patron saint of the parish.

The nave consists of six bays of columns and arches stretching from the narthex to the great arch that forms the sanctuary. The interior of the church is simple. The columns, arches, and wall surfaces are of deep ivory colored plaster, applied in the ancient manner with the palm of the hand, a treatment that produces a warm and informal effect. The Stations of the Cross are of pre-cast plaster and are treated in such a manner as to give the impression that they have been drawn from the wall itself. The ceilings of the sanctuary and nave, divided by the sanctuary arch, are of wood and consist of arched trusses springing from wood corbels directly above the columns in the nave and supported on three-quarter round capped columnettes in the sanctuary.

The stained glass windows, executed by Willet Studios of Philadelphia, constitute one of the outstanding features of the church. The choicest of hand-blown pot-metal glass and Norman slabs have been used to break up the beams of light without overloading the windows with heavy texture painting. They are done in deep tones of blue and ruby with an occasional bit of gold and green.

The seven-foot hanging altar crucifix is a superb wood carving of Christ the King with Eucharistic vestments in gold and color designed by Robert Robbins of New York.

Old traditions are expressed in the brick work. The clay was pressed into the individual moldsby hand in accordance with the old soft-mud method. Even the clay was prepared without the use of modern machinery, being “pugged” in the old fashioned manner of working a cartwheel in a circular clay pit.

Published in Roselle and Union County