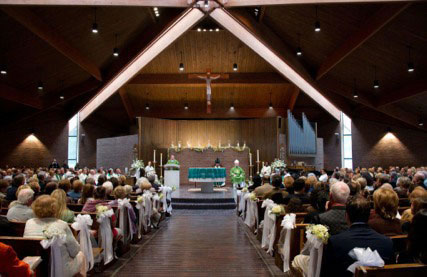 The focal point of this striking postmodern church is a circular marble altar located in the center of the floor. A fan-shaped seating arrangement assures that everyone within its nine rows is no ore than 40 feet from the celebrant. The exposed brick walls, earth tone carpeting and wooden Stations of the Cross blend harmoniously.

The structural focus of the church are four pairs of 93-foot laminated wooden beams. Each is anchored outside in concrete buttresses containing 75 cubic yards of concrete. The brick walls of the church are not designed to sustain weight; the roof is supported entirely by the laminated beams.

The architects have incorporated a plexiglass core in the beams which meet directly above the altar. During the day they flood the church with light and night they project a cross-like beacon.