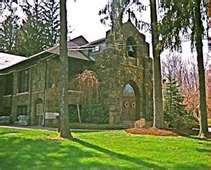 Constructed from field stone found on the property, this charming little country church was established as a mission under the direction of the rector of Immaculate Conception Seminary shortly after the seminary moved to Mahwah in 1927. The seminary returned to Seton Hall University in South Orange NJ in 1984.

The story of the stained glass windows is intriguing.