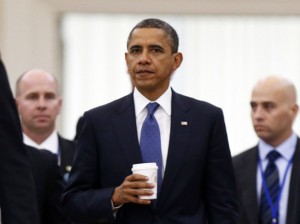 U.S. President Obama is followed by his staff as he leaves the Plenary session of the 21st ASEAN and East Asia summit in Phnom Penh (Damir Sagolj/Courtesy Reuters).

Mr. President, as you begin your second term, you and your Chinese counterpart Xi Jinping both face the challenge of building a mature and mutually beneficial bilateral relationship.  There is no need to belabor the strategic importance of the Sino-American relations for the United States.  Indeed, one may argue that it is precisely the strategic dynamics driven by China’s rise that led to your critical decision to pivot to Asia.

While we are told that a critical element of the U.S. pivot strategy is to nurture partnerships to address important common challenges, our rebalancing efforts thus far have focused almost solely on security and trade.  They are certainly crucial in promoting U.S. economic growth and regional stability, but our relationship with China and other Asian countries has become so multifaceted and complex that other issues, like health and the environment, challenge us to promote jointly the welfare of people in the Asia-Pacific region, which still accounts for a majority of the global disease burden.  As a result of the epidemiological transition, non-communicable diseases such as cancer, cardiovascular diseases, and diabetes are increasingly becoming the dominant cause of mortality.  China, which has surpassed India to become the world’s diabetes capital, also accounts for 20 percent of the world’s total cancer-caused deaths.  By increasing individual and household impoverishment and hindering socioeconomic development, the non-communicable diseases are a major cause of poverty and an urgent development challenge in the region.

In addition to the rising threat of non-communicable diseases, the Asia-Pacific region also faces growing health security threats.  With extensive animal trade and cross-border human movement, the region remains a center of global concern for the emergence of pandemic influenza or a SARS-type novel, zoonotic respiratory virus.  The lowered barriers to entry and reduced costs of bioengineering only increase the risks of accidental or intentional release of dangerous pathogens. In addition, there has been an increase in drug-resistant infections (e.g., artemisinin-resistant malaria and drug-resistant tuberculosis) and vector-borne diseases including dengue and Japanese encephalitis. These infectious diseases threaten U.S. military forces in the region, disturb international trade and travel, and even undermine regional stability.  As you and Senator Lugar wrote in a 2005 New York Times op-ed, a major disease “outbreak could cause millions of deaths, destabilize Southeast Asia…and threaten the security of governments around the world.”  Your concern was recently echoed by Mr. Xi Jinping, who said, “at present, world health problems are in close relationship with international issues, including politics, economy and social development, and have an impact on international relations and foreign policies.”

Building an enhanced global health agenda into the pivot strategy would contribute to a win-win outcome, which is precisely what Beijing hopes to achieve in what it calls a “new major country relationship.” As a Chinese scholar said, the ability to achieve such a relationship depends, among others, on how the two countries “develop their potential” for win-win cooperation.  Health is an area that is politically neutral and about which each side feels strongly.  Indeed, demographic and epidemiological transition and China’s move toward universal health coverage not only generated huge demand for more and better healthcare, but also ushered in forces supporting private and overseas investment in a sector that is traditionally monopolized by government actors.  Given the U.S. comparative advantage in pharmaceutical-related research and development as well as healthcare management and service quality, health system transition in China  would generate more business opportunities for U.S. companies and contribute to the narrowing trade deficit with China.  Equally important, tackling a common health challenge helps countries in the region build trust and reduce tensions around more contentious policy issues such as territorial dispute.  While substantial cooperation over health may provide Beijing an additional reason to focus more on domestic welfare and internal transition, improved U.S.-China relations contributes to regional security, which helps strengthen the United States’ position in the region.

In your first term, Mr. President, your administration was active in conducting health diplomacy by proposing a set of innovative guiding principles and objectives as well as launching new initiatives.  While the results of these programs were mixed, the inclusion of an enhanced global health agenda within the pivot strategy would serve to strengthen your leadership in this area and the administration’s ability to effectively handle health diplomacy.  When integrated into the pivot strategy, such an agenda would include:

Mr. President, since Beijing is not used to making any major initiatives on the global health front, you should feel free to raise these issues with Mr. Xi at the next summit.  Once you both reach an understanding on these issues, the Strategic & Economic Dialogue would be an ideal venue for moving this agenda forward.  Depending on the issue areas, several government working groups can be established, including officials from the State Department, U.S. Agency for International Development, Department of Health and Human Services, Defense Department, and the Food and Drug Administration in the United States, and the Ministry of Commerce, Ministry of Health, the State Food and Drug Administration, the Ministry of Foreign Affairs and PLA General Logistics in China.

Forty years ago, when the first batch of American health workers were allowed to visit China, Milo Leavitt, then director of the Fogarty International Center, noted in Medicine and Public Health in the People’s Republic of China that “for those who believe that the universal desire for health and relief from disease and suffering may be the strongest key to peace and international cooperation, it is significant and heartening to observe that physicians were among the first groups granted permission to visit the People’s Republic of China.” If cooperation over health contributed to the opening of China in the early 1970s, now it can and should play a much larger role in building strategic trust and contributing to the success of your pivot strategy.  We look forward to your leadership in shaping this global health agenda.