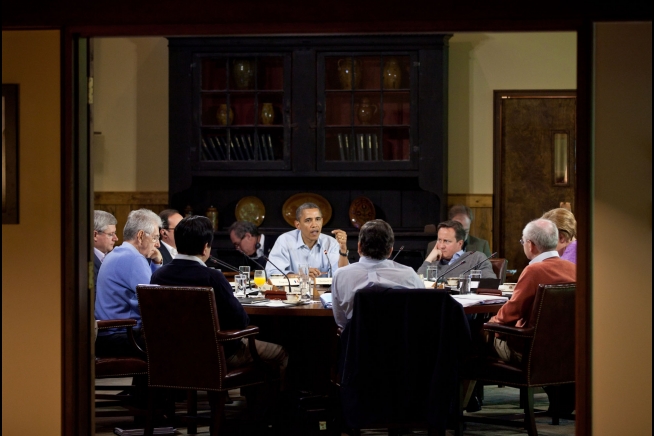 Global Health at the G8: Integration, In Decline or Simply Stalled?

On 18-19 May 2012, the leaders of the Group of Eight (G8), with the exception of Russian President Vladimir Putin, met at Camp David for their 38th annual summit. At the brief meeting, they focused on the global economic crisis, energy security and climate change, food security and nutrition, and political security concerns.1 These issues were certainly worthy of the leaders’ attention. However, for the second year in a row, the amount of attention devoted to global health declined.

Global health was not completely absent from the summit. It was integrated into the leaders’ discussion on other topics. They committed to “exchange information on rogue internet pharmacy sites in accordance with national law and share best practices on combating counterfeit medical products” in order to protect public health and consumer safety.1 Continuing with their long-standing acknowledgment of the climate-health connection, they committed to reduce climate pollutants that have an impact on human health.1,2

To tackle food security and nutrition, the leaders launched the New Alliance for Food Security and Nutrition “to accelerate the flow of private capital to African agriculture, take to scale new technologies and other innovations that can increase sustainable agricultural productivity, and reduce the risk borne by vulnerable economies and communities,” which is anticipated to “lift 50 million people out of poverty over the next decade.”1 The leaders reiterated their pledge to achieve the Millennium Development Goals. They also welcomed the Camp David Accountability Report, which made note of progress that had been made on their past global health commitments1,3 Lastly, the leaders reiterated their promise to advance human rights and opportunities for women in order to improve maternal health and reduce child mortality.1

These were important steps. Certainly, if they are effective, they could help reduce a number of global health disparities. However, if the G8 is aiming for a more integrated approach to development, a much more robust approach will be necessary.

In addition, the leaders cannot simply abandon all of their past efforts.2 However, at this year’s summit, most of the familiar and important global health dialogue that has developed and evolved at past summits was noticeably absent.2 There was no mention of HIV/AIDS, polio, malaria, tuberculosis, neglected tropical diseases, health workers, health systems, the Global Fund, or the GAVI Alliance. The lack of attention given to these issues – whether it was due to the economic crisis and lack of financial resources; absence of media attention and civil society advocacy; a decline in the G8’s global governance abilities;4 fall of global health on foreign policy agendas;5 or due to a shift in the G8’s approach to the health – is cause for concern because many of the G8’s past commitments in these areas have yet to be fulfilled; and many additional challenges still remain.3

This is particularly discouraging and concerning because the G8 has become a steady presence in the field of global health governance.6,7 Over the past twelve years, the leaders helped to establish and fund the Global Fund to fight HIV/AIDS, malaria and tuberculosis; they have fought to eradicate polio; they have taken steps to reduce the burden of tuberculosis and malaria; they have increased access to HIV/AIDS treatment; and most recently, they have taken steps to address maternal, newborn and child health.

Therefore, even though imperfect, the G8 has played a significant role in the field of global health. And despite what some have suggested, no other organization has proven itself able or willing to fill its role.8 It may be too soon to tell whether the recent lack of attention devoted to health at the G8 is an anomaly, or if it signals a shift or a steady decline. However, one thing is clear – if health continues to wane on the G8’s agenda, a serious void will be left.

The Camp David Accountability Report notes, “global health remains a top G-8 priority, despite the background of constrained economies.”3 At the 2012 summit, the leaders clearly failed to live up to this claim. Top priorities require leadership. The 2013 summit in the United Kingdom will provide the G8 with another opportunity to prove that they can fulfill that role.