"I cannot now write very plain, when I strive to write my best " (Cavendish, 27)

Margaret Lucas Cavendish (b. 1623) was a “Jane” of all trade, so to speak. Surrounding herself with multiple studies, Cavendish was a poet, philosopher, scientist, and playwright. Born Margaret Lucas at 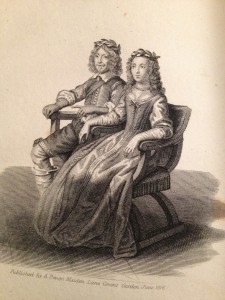 Engraving of William and Margaret Cavendish by J. Mitan

St. John’s Abbey in Colchester, England, she became a maid of honor to Queen Henrietta Maria in 1643 during her exile in Oxford. A year later, the queen and her attendants fled the rebellion to Paris to stay in Versailles. In 1645, Margaret and William Cavendish married despite a large age difference and class difference as well (Shaver, ix).

During her exile, Cavendish explored playwriting. With English theatres closed under the new government, many loyalists in exile, or otherwise, set to writing “closet dramas” which were more private (For more on the Closet Dramas look to the right).  Karen Raber points out the closet dramas of this age reflect on the important dichotomy at the time “between the public-which includes the public world of the theater- and the private- a space or state conceived of as distant...where the ‘private individual’ can retreat to recreate, ponder, or fashion a self” (189). With Cavendish’s more distant and shy character during her time in exile, as well as her interest in philosophical nature, it is little wonder as to why she indulged herself with playwriting at this time.

Cavendish began to publish her works in 1653, beginning with Poems and Fancies and Philosophical Fancies (Saver ix). Once published, she would circulate her books to libraries and literary figures. These eccentric actions, along with her different sense of style, earned her nick name, “Mad Madge”. (Narain 69)  Although she was greatly criticized, this eccentric behavior and background earning her fame and the feminist values in her writing helped to spread and popularize women’s role in drama.

Closet plays, especially by early modern women, were mostly dichotomous: they resemble stage plays but are not performed, they are produced by aristocrats but hold the traditions of commercial drama, have political purpose but no exercise of power. ( Straznicky, 1) These plays were privately written and usually never performed. Because of this, the genre has some benefits. The writer could comment on political activity, write about unpopular topics, experiment with more creative elements in playwrighting. The playwrights did not have to worry, in other words, about the pressure from their audience as their audience was mostly themselves. It was a freeing style that suited Cavendish quite well during her time in Exile.

Cavendish lived in a strange medium world between clearly stating her wish for fame to spread her ideas, but also challenging the values in material wealth and fame (Narain). Nora Narain states Cavendish felt, “morally compelled to pursue [writing]” (70). Her works were already widely known from her own efforts, and her husband was well known in the theatre community as well although he received more positive feedback (Raber2 470). Cavendish began publishing her plays only after the English Restoration with Charles II on the throne. Many people, intrigued by her infamy in the publishing world,  read them expected the plays to follow the same critique as post Restoration drama (Raber1 195).

However, as already explained, Cavendish’s work held a different context of privacy and femininity. Most popularity Cavendish received “condemned her plays because they were not made up according to the ‘Rules of Art’” (Payne 19). Cavendish recognized the problems in her works and understood the criticism, yet perceived her lack of style to be a good thing. Linda Payne remarks “she seemed to consider the kind of ordered logic and ‘rules’ which much of her audience expected form literature to be a masculine trait” (21). Cavendish expressed that lack of structure and “fancy” to be feminine traits she wished to reiterate in her writing (Payne 21). So, while Cavendish certainly grew to infamy for her eccentric writing, it mattered more that she was reaching her audience, female artists.

A project by Shannon Nicole Strawhun on Margaret Cavendish’s contributions to women’s drama.

"Do figure every Passion,

See how the Fancie's wrought,

And what makes every Thought;

~The Convent of Pleasure

A clip of a production of The Convent of Pleasure by Margaret Cavendish performed by The University of Waikato Theatre students. Note the difference in style with longer dialogue and rather awkward physical actions such as the dance, yet the concept of a female utopia and peace with the arts were greatly significant as women became more and more intricate in drama.

Margaret Cavendish’s greatest contribution to early British Women playwrights might have simply been her fame encouraging female playwrights. With her wild style, both fashion and literary, Cavendish had already earned a bit of a reputation for herself. As you can see in the picture to the right, Cavendish often wore some strange clothing including her strange turban/ feathered/ hat and some etchings and painting of her with an odd cape. In addition, living as the Duchess of Newcastle and a former maid of honor with the Queen, she would have had the perfect amount of social exposure to promote her work. However, from many of Cavendish’s writing about fame her actions seem less about her won popularity and more about expressing her and fellow female thoughts 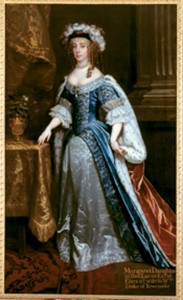 and values in art (Narain, 71). Cavendish’s title and style would have attracted more than just females, though. During the time of Cavendish’s exile, the British theatres were closed, and so, loyalists would choose to write closet dramas to express their nostalgia for the days with the British nobility.( Straznicky 77). After the Restoration, the closet dramas were popular ways to show what loyalty one had during this time when the monarchy was displaced. Cavendish publishing her closet dramas in 1662 illustrates her recognition that they would add to the coverage she would gain in literary circles. Whether the works were good or not would come into play later after the works had already become so popular.

Once they started reading the works, Margaret Cavendish’s use of feminist themes and conceptions would also influence budding female playwrights, actresses, and their male counterparts. Cavendish worked with feminine ideals and utopian themes illustrating a new style appealing the generating female audiences and actresses (Payne27). Like The Convent of Pleasure, these plays would focus on casts made of majority of women and played with Cavendish’s focus on the “fancy” element of femininity. Although the plays were the most eloquent speeches, riveting plotlines, or realistic staging, they would have a lot of emotion and rebellious techniques women would have been interested in (Payne 27). So, while Cavendish’s dramatic works may not be comparable to Shakespeare as far as the writing itself, the influence the writer and the style had at the time helped to fuel more and more interest in women’s drama.

Cavendish, Margaret. A True Relation of the Birth, Breeding, and Life of Margaret Cavendish, Duchess of Newcastle. London: printed by J. Martin and J. Allestrye, at the bell, in St. Paul’s church yard, 1656. Print.

Narain, Mona. “Notorious Celebrity: Margaret Cavendish and the Spectacle of Fame.” The Journal of the Midwest Modern Language Association 42.2 (2009), 69-95. Web.