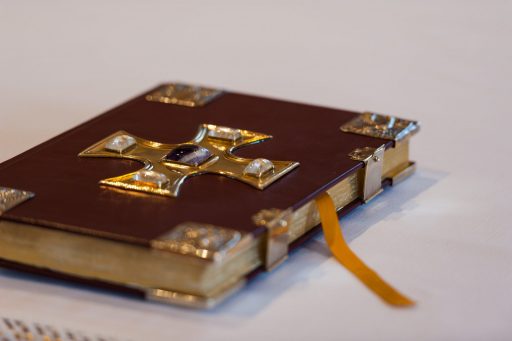 Since many have undertaken to compile a narrative of the events
that have been fulfilled among us,
just as those who were eyewitnesses from the beginning
and ministers of the word have handed them down to us,
I too have decided,
after investigating everything accurately anew,
to write it down in an orderly sequence for you,
most excellent Theophilus,
so that you may realize the certainty of the teachings
you have received.Jesus returned to Galilee in the power of the Spirit,
and news of him spread throughout the whole region.
He taught in their synagogues and was praised by all.He came to Nazareth, where he had grown up,
and went according to his custom
into the synagogue on the sabbath day.
He stood up to read and was handed a scroll of the prophet Isaiah.
He unrolled the scroll and found the passage where it was written:
The Spirit of the Lord is upon me,
because he has anointed me
to bring glad tidings to the poor.
He has sent me to proclaim liberty to captives
and recovery of sight to the blind,
to let the oppressed go free,
and to proclaim a year acceptable to the Lord.
Rolling up the scroll, he handed it back to the attendant and sat down,
and the eyes of all in the synagogue looked intently at him.
He said to them,
“Today this Scripture passage is fulfilled in your hearing.”
What inspires you in this Gospel?  Is there a word or phrase that stands out for you?  Share your reflections by posting a comment.