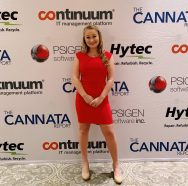 I stood behind the table, clipboard in hand, staring at the sea of nametags in front of me. I looked over to my friend, Natalie Zoladkiewicz, a freshman in the Leadership Honors Development Program, who was sharing this incredible evening with me and was equally as excited. Being able to help out at The Cannata Report’s 34thAnnual Awards and Charities Dinner held at the Madison Hotel seemed too good to be true. As people began to flood in, the nametags slowly told a story. After picking up their own nametag, guests would scan the table and smile at the sight of other names.  Rather than being a large group of strangers, I saw a network of well-respected individuals joining one another for a night of celebration.

Once the dinner portion of the evening began, Natalie and I were fortunate enough to join The Cannata Report’s very own Executive Marketing Director, Cathy O’Brien. However, we were no strangers to the Cannata Family as Frank and Carol Cannata had both personally greeted us upon our arrival. The night kicked off with opening remarks by President and CEO CJ Cannata, followed by a variety of awards. As the nominees for each award were presented, cheers erupted from different sides of the room. The companies here wanted to win, and it showed.

Natalie and I appreciated that The Cannata Report had a portion called, “On Camera with the Women Influencers of 2019.” Showcased were the powerful women in the room and what they had accomplished. Natalie and I felt goosebumps together during this time and agreed that we were inspired by the great women around us. It wasn’t until the announcement of the Humanitarian Award that I realized what a large impact The Cannata Report has. After honoring Ray Morgan Company, the executive on stage struggled to keep himself together as emotion overwhelmed him. Not one person in the room looked away, instead everyone joined in a loud applause.

When the after-party began, I walked through the crowd of people. Instead of feeling intimidated, I had the confidence to go up and mingle. After being in the Leadership Honors Development Program for three years, I had groomed my confidence and social skills to thrive in an environment just like this. Natalie, who is only a freshman, had no problem going up to tables of executives and introducing herself. I felt proud to see that we had a presence, and the ability to go after what we wanted.

All in all, it was an incredible night. The Cannata Report held an awards dinner that brought together people from all over to celebrate everyone’s accomplishments. Not only this, but I saw how personable each team member was. It started from the moment Carol Cannata called me a week before the event, wanting to talk on the phone and make sure I was feeling prepared. It then became evident as Cathy O’Brien knew the name of every single guest that walked through the doors, greeting them each as kindly as the next. What really sealed the deal was when CJ Cannata came to my table to greet and kiss on his head the photographer sitting with us, who as it turned out was an old friend from his hometown back in Connecticut. I ended the night feeling inspired, but most of all grateful. As a member of the Leadership Development Honors Program, it is important that we stop to realize how fortunate we are for the opportunities around us. This Thursday night could have been spent at home, or in the library, but instead I was out in the world making connections and gaining new learnings for life. Natalie and I had a night to remember.